Thirty-five Peace Corps Volunteers were sworn in by Chargé d’Affaires Peter A. Malnak and the Peace Corps/Nepal Country Director Sherry Russell to begin their two-year service in Nepal.  The new Volunteers join over 3,800 Volunteers who served before them in Nepal since 1962, and over 7,200 Peace Corps Volunteers currently serving in 65 other countries around the world.  This group of Volunteers is the seventh to arrive in Nepal since the Peace Corps program re-opened in 2012.
“I cannot imagine a finer example of the collaboration between our two nations than the long-standing relationship between Peace Corps and Nepal. These trainees follow in the footsteps of over 3,800 previous volunteers, including some here today, who heeded the call to service and chose to come to Nepal to serve not only our own country, but also the people of Nepal,” said Chargé d’Affaires Peter Malnak.

The thirty-five Peace Corps Volunteers arrived in April 2018 and underwent 11 weeks of intensive language, cross-cultural and technical training in Kavre District in preparation for their service.  The Volunteers have been assigned to  seven districts in three provinces to work on food and nutrition security projects in coordination with the Ministries of Health and Population, Ministry of Agriculture, Land Management, Ministry of Finance, Ministry of Home Affairs and Ministry of Foreign Affairs  and support Government of Nepal’s food and nutrion security priorities in the area . 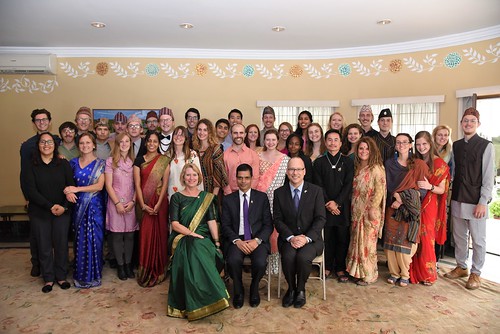