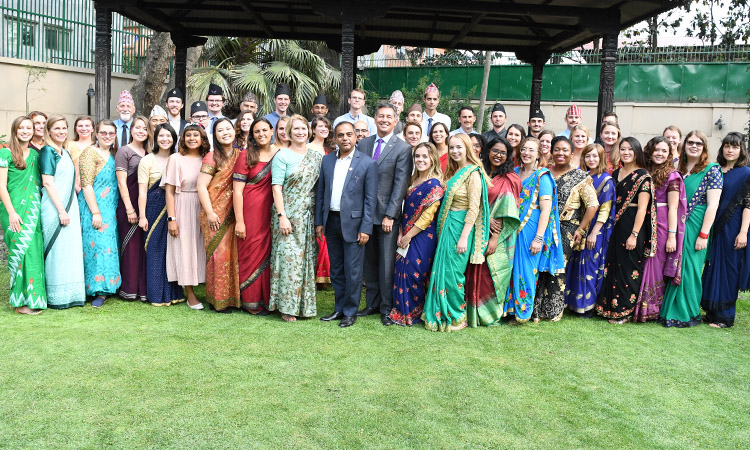 Forty-nine Peace Corps Volunteers were sworn in by Ambassador Randy Berry and the Peace Corps/Nepal Country Director Sherry Russell to begin their two-year service in Nepal. The new Volunteers join over 3,800 Volunteers who served before them in Nepal since 1962, and over 7,200 Peace Corps Volunteers currently serving in 65 other countries around the world. The Honorable Chakra Pani Khanal Minister of Agriculture and Livestock Development was the Chief Guest.
“As Peace Corps Volunteers, working in remote areas and with traditionally marginalized populations, you will have an outsized impact on the good that the United States can do and on the understanding that Nepalis have of Americans and our culture and values,” said Ambassador Berry.
The forty-nine Peace Corps Volunteers arrived in February 2019 and underwent 11 weeks of intensive language, cross-cultural and technical training in Kavre District in preparation for their service. The Volunteers have been assigned to ten districts in Provinces 3 to 7 to teach English in government schools and to work on food security, youth development, and health projects in coordination with the Ministries of Education, Health and Agriculture, and in support of the Government of Nepal’s priorities. In response to a request from the Ministry of Education, this group of Volunteers includes the first group of English teaching volunteers in Nepal since 2004.
Since its establishment in 1961, the Peace Corps has been guided by a mission of world peace and friendship. The agency advances development and builds cross-cultural understanding around the world. The Peace Corps advances its mission through the work of the Volunteers, both during and after their term of service. Rather than providing monetary assistance to countries, the agency sends Volunteers to share their skills and experience while living and working alongside local individuals and communities. This day-to-day interaction provides Volunteers with a unique perspective and the opportunity to partner with local communities to address their development challenges and to strengthen mutual understanding. More than 220,000 Volunteers have served in 140 countries since 1961.