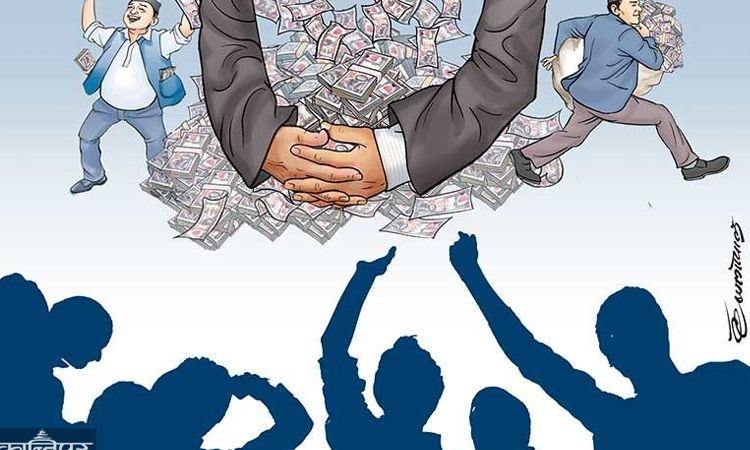 Corruption has been the subject of increased public dialogue over the last few months. This is heartening because, in a democracy, citizens must address issues of public concern. The people must partner with government leaders to end corruption. Just as leaders have a duty to establish and enforce the rules, citizens must hold these leaders to their duty. Democratic accountability is more critical as Nepal transitions to federalism and the first government elected under the new constitution takes office. Local administrators can be lured into the shadows where corrupt networks already scheme, or they can serve as examples of integrity, shining a light with transparent governance. Citizen pressure makes a decisive difference.

Citizens know that corruption infects the political, social, and economic life of Nepal. Cartels—these networks of the corrupt and colluding—control major sectors of Nepal’s economy. They advantage a few and hurt everyone else. It is reasonable to ask how the county has become so accepting of these shadowy groups that destroy Nepalis’ quality of life. Acceptance of corruption starts small. It is easier to pay extra for the electricity bill than to wait in long lines. It is cheaper to bribe a land revenue official with Rs20,000 rupees than pay an assessment of Rs40,000. These may seem to be small acts driven by personal convenience, but they create an environment permissive of larger corruption. Corruption takes root and expands into all areas of society, leaving citizens to succumb, believing that there is no hope or alternative. But Nepali citizens can change this dynamic by rejecting corruption at all levels and demanding transparency.

Governance must be transparent because corruption hides in dark corners, making accountability difficult. Nepal is not alone in having a history of shadowy governance and self-serving cartels. The United States faced cartels in the early 20th century when President Theodore Roosevelt spoke of “the unholy alliance between corrupt business and corrupt politics.” He set out to destroy what he called “an invisible government owing no allegiance and acknowledging no responsibility to the people.” Nepal can also confront and destroy these cartels and drag governance into the light to be accountable to the people. In fact, Nepal already has success stories in the fight against corruption, demonstrating that more people may be ready to take important next steps toward transparency.

Nepal’s electricity supply is one example of success. Load shedding did immeasurable damage to Nepal’s economy, and literally kept Nepalis in the dark. Tragically, it was unnecessary because, according to the work of numerous investigative journalists, the electricity shortage was artificial and designed to enrich a few. Shortly after load shedding’s abrupt end, the Nepali Times reported: “It was after [NEA Managing Director Kulman] Ghising started cleaning up NEA that engineers and whistleblowers within the utility got the courage to speak out about the rot within that made a few people rich at the cost of wrecking the national economy, and keeping millions of Nepalis in misery for a decade.” One person was credited with breaking up that cartel and the corrupt practices impacting residents. Courage is contagious, though, and as Ghising began taking action, others found the fortitude to combat corruption.

Only a few years ago, traffic police were routinely bribed—a pattern so common that it hardly made the news. Effective leadership, media exposure, and citizen intolerance have reduced shakedowns by police and efforts by the police to clean up their own ranks have begun to show results in a reduction in traffic police soliciting bribes. In fact, hardly a day goes by without hearing about the corruption scandals that touch every sector: education, health care, transportation, procurement, revenue collection, and more.  It may be discouraging to see so much corruption, but the fact that corruption is being exposed is also a cause for celebration. Transparency is increasing and citizens are ready for change.

Citizen outrage is justified because the lack of government transparency affects everything from the quality of children’s education, to travel across town, to the price of food. Citizen intolerance of corruption is critical, especially as accountability becomes more local through federalism. Even small acts of defiance can help, like refusing to pay the little bribes. As the United States supports Nepal’s free press, you too can support investigative journalists by sharing their work on your Facebook and Twitter feeds and reporting instances of corruption to watchdogs. As the United States supports a Public Financial Management Strengthening Project, you can also support transparency by demanding publication of public budgets and spending records, and participating in public meetings on spending priorities and project progress. As government drafts and debates new regulations, citizens should call for their public release in order to have insight into and protection against new laws and regulations that might further protect vested interests at the public’s expense. The United States is working with Nepal to help eliminate corruption, and supports Nepal citizens in this effort. May Nepal see the emergence of a culture of condemnation that rejects the invisible government, destroys the unholy alliances of cartels, and builds a society that is fair and functional for all Nepalis.