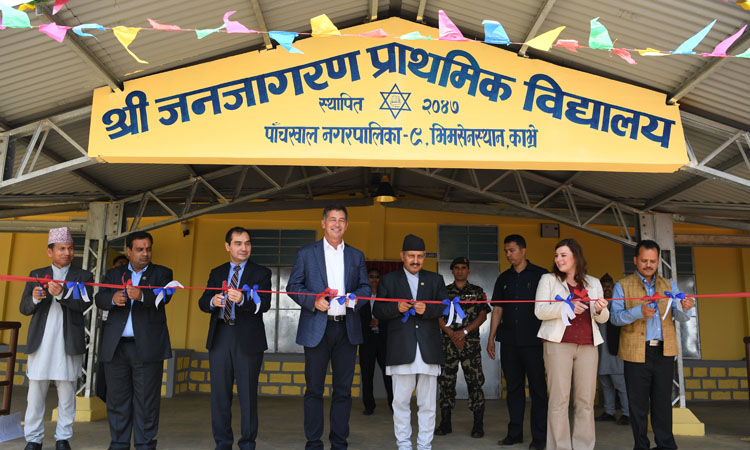 Today, U.S. Ambassador to Nepal, Randy W. Berry handed over three new primary schools to the people of Kavrepalanchowk District. These schools were constructed thanks to the support of the American people through the United States Agency for International Development (USAID).

At the event, Ambassador Berry told Education Minister Giriraj Mani Pokharel and the local community: “For 72 years, the United States has had a strong and enduring partnership with Nepal, and we continue to be a trusted and reliable partner. This school and the two others we are handing over today are a true reflection of the American people’s long standing commitment to help rebuild a safer Nepal for this and future generations. We are–and always will be–close where it counts. ”

The handover showcased the United States’ continued commitment to reconstruct a safer Nepal. Following the 2015 earthquake, the extensive damage interrupted the education of over two million children. Illustrating the U.S. Government’s commitment to education, USAID immediately began a comprehensive response, which allowed more than 93,000 students to continue to learn in the midst of the disaster and ultimately return to safer schools.

In the immediate aftermath of the earthquakes, USAID partnered with UNICEF and the MOEST to build 1,045 Temporary Learning Centers and distribute teaching and learning materials to ensure that children could return to school as quickly as possible. In the recovery phase, USAID began constructing 250 Transitional Learning Structures—durable, semi-permanent structures—to provide safe learning spaces for children attending small schools in remote areas that were damaged or destroyed until funding is available for reconstruction. At the same time, USAID began a massive effort to reconstruct 29 seismically safe, well-equipped, and child- and disabled-friendly schools in seven districts heavily impacted by the earthquake.

The United States Government, in partnership with the Asian Development Bank, has already handed over eight earthquake-safe modern education facilities and expects to handover seven more this year. These disaster-resilient schools – which have the potential to save lives – will also ensure that children can remain in school following future massive natural disasters. Overall, the 29 new schools will benefit more than 8,800 students in five districts and increase school attendance and retention.

Since the 2015 earthquake, the United States has invested more than $190 million in response and recovery. In addition to supporting education, these funds have trained nearly 23,000 professionals on earthquake-resilient construction techniques, helped homeowners to rebuild over 45,500 homes to modern safety standards (benefiting nearly 228,000 individuals), and initiated reconstruction of seven vital health facilities, including the now operational Bahrabise Primary Health Care Center.