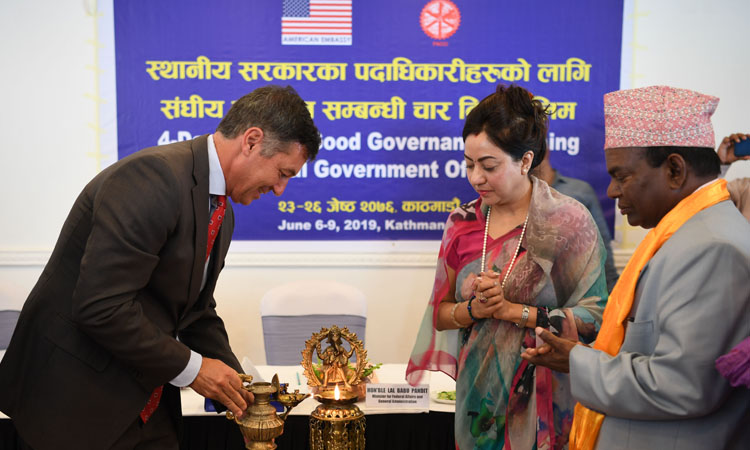 To create this program, a team of experts from the University of Maryland (UMD) traveled to Kathmandu, Bardiya, Banke, and Dang districts to meet firsthand with Nepalis and find out what is most important to them in local governance. Focus groups of local officials shared their perceptions of knowledge gaps and most pressing needs among Nepal’s first cohort of locally elected officials in 20 years, while citizens groups discussed their needs and concerns from the perspective of constituents. The team of experts from UMD was led by Ron Sitoula, the Nepali-American Vice Mayor of the town of Indian Head, Maryland.

Speaking at the launch event, Lal Babu Pandit, Minister of Federal Affairs and General Administration, said that the training will provide specific skills to Nepal’s newest local leaders to best serve their communities.  Borrowing a phrase from President Abraham Lincoln, Ambassador Berry went on to say that “elected officials are helping to build a government of the people, by the people, and for the people.”

The trainings are divided into five modules: Conducting Effective Meetings, Resolving & Managing Conflict, Community Engagement, Local Government Budget Training, and Building an Effective Judicial System.  Each module will provide valuable skill-sets such as creating and managing budgets, conflict management, and conducting effective meetings. The training will be administered by the Federation of Nepal Chambers of Commerce and Industry at all seven American Corners throughout Nepal.