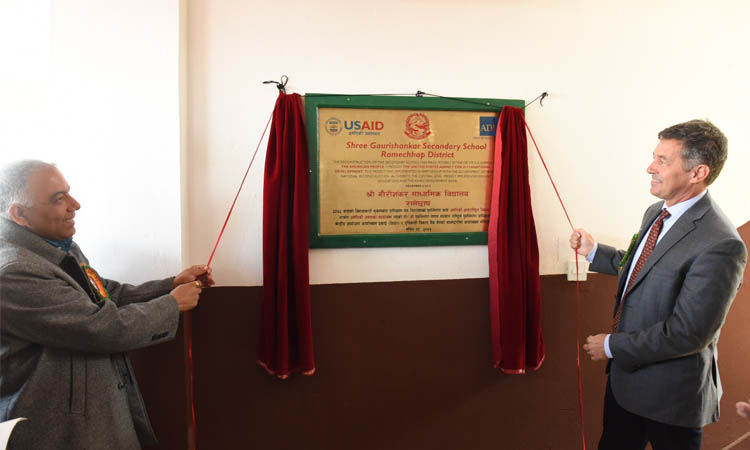 Ramechhap—Today, U.S. Ambassador to Nepal, Randy W. Berry—in partnership with the National Reconstruction Authority, the Ministry of Education, and the Asian Development Bank—handed over Gaurishankar Secondary School in Ramechhap.  This school was severely damaged during the 2015 earthquake and is the first of 29 new, permanent schools that are being reconstructed with the support of the American people through the United States Agency for International Development (USAID).

At the event Ambassador Berry said, “The United States is proud to partner with the government and people of Nepal to build back safer and stronger.  A healthy and educated country can overcome the hardships faced following the 2015 earthquake and enable Nepal to progress further along its path to self-reliance.”

In consultation with the Government of Nepal and other development partners, the United States prioritized rebuilding public facilities–especially schools and health facilities–because education and health are critical to a resilient society and necessary to avoid development backsliding following the 2015 earthquakes.  Research shows that girls in developing countries may increase their wages later in life by up to 25 percent with each additional year of secondary schooling.  In addition, education has a ripple effect that positively influences health outcomes for women and their families.  Likewise, access to quality health services is essential to ensure a healthy population that can contribute to the economic prosperity of Nepal.  To support Nepal’s health and education, USAID is currently working to reconstruct at total of 36 schools and health acilities in earthquake-affected regions.

Since the 2015 earthquakes, USAID has invested more than $190 million in earthquake response and recovery.  These funds helped homeowners to rebuild over 43,000 homes to modern safety standards; train more than 15,000 engineers, contractors, architects, masons, and carpenters on earthquake-resistant construction techniques; build over 1,000 temporary learning centers and 250 transitional learning structures; and provide critical school materials to allow over 97,000 vulnerable students to resume their education with minimal disruption.