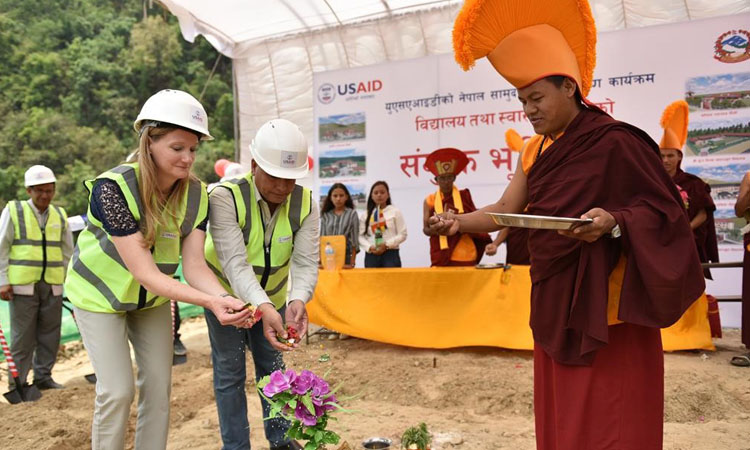 Deputy Mission Director for the United States Agency for International Development (USAID)/Nepal, Adriana Hayes, participated in the groundbreaking for six schools and two health facilities in Makawanpur District that were damaged during the 2015 earthquakes.

At the event, Ms. Hayes said, “We are proud to partner with the Nepali government and the people of Makawanpur to build back safer and stronger. USAID’s post-earthquake assistance prioritizes rebuilding public facilities–especially schools and health facilities–because we firmly believe that an educated and healthy population will contribute to the economic prosperity of Nepal.”

The groundbreaking showcased the United States’ continued commitment to rebuild a safer Nepal. Since the 2015 earthquake, the United States Government has invested more than $190 million in response and recovery. USAID dedicated more than $50 million to reconstruct 36 essential schools and health facilities to serve over 237,000 Nepalis in seven districts. In addition, US-funded projects have trained nearly 23,000 construction professionals on earthquake-resilient construction techniques and helped over 45,500 homeowners rebuild their dwellings to modern safety standards, providing safe and earthquake resistance housing to nearly 228,000 Nepalis.