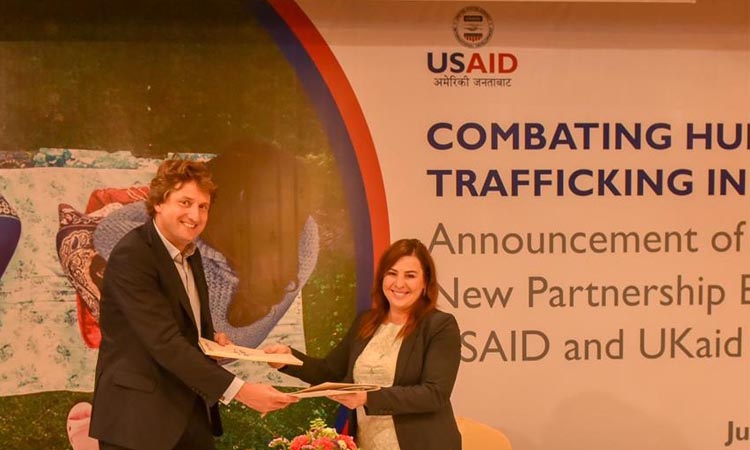 Today, the development agencies of the United States and United Kingdom announced a partnership that will support the Government of Nepal in reducing human trafficking. This new partnership between the United States Agency for International Development (USAID) and the United Kingdom’s Department for International Development (DFID) will expand USAID’s ongoing Hamro Samman Project to support the Government of Nepal’s efforts to combat human trafficking in 10 districts.

Speaking at the ceremony, USAID/Nepal Mission Director Amy Tohill-Stull noted, “The American people are committed to countering trafficking in persons worldwide. For over a decade, USAID’s support has enabled Nepal to strengthen 49 policies to prevent human trafficking, prosecute traffickers and protect and rehabilitate survivors. We are pleased that DFID has joined our partnership, as our collaboration will enable us to expand our efforts to address this serious issue.”

Likewise, Head of DFID in Nepal, Dr. Rurik Marsden, commented, “The UK is committed to working with the Government of Nepal to help end modern slavery in Nepal. We are happy to join hands with USAID on this mission. I am confident that DFID’s contribution will help strengthen government systems to address human trafficking and generate evidence to better plan and respond to combat human trafficking.”

The U.S. Government’s 2018 Trafficking in Persons (TIP) Report ranks Nepal as a tier 2 country and identifies Nepal as a source, transit and destination country for human trafficking. While this report estimates that 30,000 Nepali girls and women are commercially exploited for sex each year, the 2018 Global Slavery Index estimates that 171,000 Nepalis are subject to slavery at any given time.

Despite these challenges, Hamro Samman, which was initiated in 2017 and is implemented by Winrock International, has made substantial strides in reducing human trafficking in Nepal. Over the past two years, the project has:

Over the project’s remaining three years, the partnership with DFID will expand on Hamro Samman’s past success by combining USAID’s and DFID’s technical expertise to address human trafficking, specifically in the foreign labor migration process and entertainment sectors. The project aims to strengthen the Government of Nepal’s system to tackle human trafficking and build synergies among the government, civil society and the private sector to strengthen laws to prosecute traffickers and better support survivors under Nepal’s federal structure.