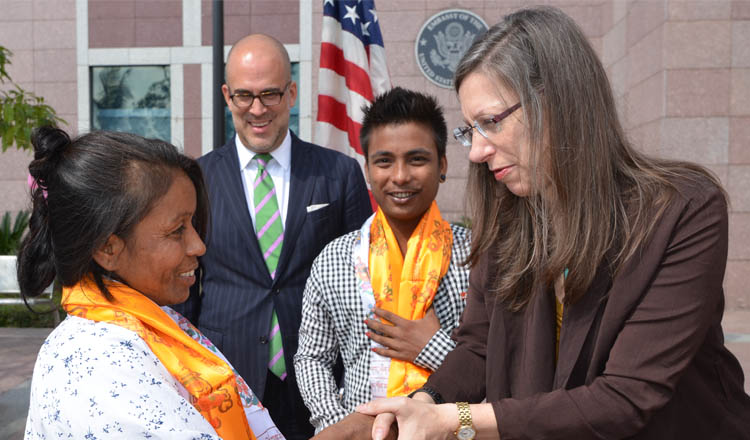 Kathmandu – U.S. Ambassador to Nepal Alaina B. Teplitz today met with, and bid farewell to, Ms. Sahri Maya Thatal, the 90,000th Bhutanese refugee to be resettled in the United States. Ms. Thatal and her four children will leave Nepal tomorrow to start their new lives in New Hampshire. Ambassador Teplitz visited the the Beldangi Bhutanese Refugee Camp in Jhapa last week where she discussed the third-country resettlement program which is close to completion.

“The Nepali people and government have been very gracious hosts to refugees for decades and the third-country resettlement of Bhutanese refugees is one of the most successful refugee management stories in recent memory,” she said. “However, the massive resettlement program is coming to an end.  While the international community continues to ask the Government of Bhutan to repatriate those refugees whowould like to return, finding a durable solution here in Nepal for those who will remain is critical.”

In a ceremony at the U.S. Embassy, Ms. Thatal shared her hopes for new opportunities for herself and her children in the United States after spending over 20 years in a refugee camp. Paul Norton, International Organization for Migration (IOM) Chief of Mission, and Kevin Allen, United Nations High Commissioner for Refugees (UNHCR) Country Representative, joined Ambassador Teplitz in bidding farewell to Ms. Thatal. With 90,000 in the United States, the total number of Bhutanese refugees who have been resettled to third-countries has reached 105,000.

The United States, in coordination with the government of Nepal, UNHCR, IOM, and the governments of Australia, Canada, Denmark, the Netherlands, New Zealand, Norway, and the United Kingdom began resettling Bhutanese refugees from eastern Nepal in 2007.